To focus on speed, what a press vendor usually means when talking to Global Graphics Software is “I need the Digital Front End (DFE) for my press to be able to print every job at full engine speed”, which is a subject that  we’re very happy to talk about and to demonstrate solutions for, even as the press engines themselves get faster with every new version.

But the components such as the RIP in a DFE are not the only things that can affect whether a press can be driven at full engine speed. There are plenty of things that a designer or composition engine can do that can vary how fast a PDF file can be RIPped by several orders of magnitude, without affecting the visual appearance of the print.

Obviously we like it when the files are efficiently built, but sometimes it’s not obvious to a designer, or a software developer working on either a design application or composition engine how they might be able to improve the files that they generate. That’s why we created a guide called “Do PDF/VT Right” back in 2014, stuffed full of actionable recommendations for both designers and developers making PDF files for variable data printing.

Over the years since we’ve updated and extended the guide. The rework in 2020 was sufficiently significant that we renamed it to “Full Speed Ahead: How to make variable data PDF files that won’t slow your digital press”.

It’s been very well received, and clearly filled a gap in materials available for the target audience; there have been thousands of downloads and printed copies given away at trade shows.

At the end of 2020 a new PDF/VT standard, PDF/VT-3, was published, and the committee in ISO that had developed it asked the PDF Association to write application notes for it, to assist developers implementing it with more extensive detail than can be included in International Standards. That sounds very formal, but in practice the two committees have many members in common (as an example I was project editor on PDF/VT-3 and I co-chair the PDF Association’s PDF/VT Technical Working Group (TWG)). The hand-over was mainly to enable much more agile and responsive document development and more flexibility around publication.

After some debate the PDF/VT TWG decided that what the industry really needed was a best-practice guide in how to construct efficient PDF files for VDP, whether they’re PDF/VT or ‘just’ “optimized PDF”. Any developer who has worked with PDF/VT-1 should have no trouble in implementing VT-3, but there are still some issues with slow processing of very inefficient PDF files preventing print service providers, converters etc from running their digital presses at full engine speed.

The next step was to agree to do the development of that guide in a new form of committee within the PDF Association, specifically so that people who were not members of the Association could be involved.

At this stage Global Graphics offered the text of Full Speed Ahead as a starting point for the Association guide, an offer that was very quickly accepted. But it was felt that it could be made more accessible if two editions of the guide were produced: one for designers and one for developers, rather than combining the two into a single document. Amongst other things it means that each guide can use the most appropriate terminology for each audience, which always makes reading easier.

We were lucky to have Pat McGrew working with us and she took over as champion for the designer edition, while I led on the developer one.

And so I’m very happy to announce that both the Developer and Designer editions of the PDF Association’s “Best Practice in creating PDF files for Variable Data Printing” have just been published and are available with a lot of other useful resources at https://www.pdfa.org/resources/.

Martin Bailey, former distinguished technologist at Global Graphics Software, is currently the primary UK expert to the ISO committees maintaining and developing PDF and PDF/VT and is the author of Full Speed Ahead: how to make variable data PDF files that won’t slow your digital press, a guide offering advice to anyone with a stake in variable data printing including graphic designers, print buyers, composition developers and users.

To be the first to receive our blog posts, news updates and product news why not subscribe to our monthly newsletter? Subscribe here

In this post, Global Graphics Software’s product manager for Mako, David Stevenson, explores the challenge of printing large amounts of raster data and the options available to ensure that data doesn’t slow down your digital press:

The print market is increasingly moving to digital: digital printing offers many advantages over conventional printing, the most valuable of these is mass-produced, personalized output making every copy of the print different. At the same time  digital presses are getting faster, wider, and printing at higher resolutions with extended gamut color becoming common place.

To drive the new class of digital presses, you need vast amounts of raster data every second. Traditional print software designed for non-digital workflows attempts to handle this vast amount of data by RIPping ahead, storing rasters to physical disks. However, the rate at which data is needed for the digital press causes disk-based workflows to rapidly hit the data rate boundary. This is the point where even state-of-the-art storage devices are simply too small and slow for the huge data rates required to keep the press running at full rated speed.

This is leading to a new generation of RIPs that ditch the disk and RIP print jobs on the fly directly to the press electronics. As well as driving much higher data rates, it also has the benefit of no wasted time RIPping ahead.

As you can imagine, RIPping directly to the press electronics presents some engineering challenges. For example, two print jobs may look identical before and after printing, but the way in which they have been made can cause them to RIP at very different rates. Additionally, your RIP of choice can have optimizations that make jobs constructed in certain ways to RIP faster or slower. This variability in print job and RIP time is a bit like playing a game of Russian roulette: if you lose the press will be starved of data causing wasted product or delivery delays.

With a RIP driving your press directly you need to have confidence that all jobs submitted can be printed at full speed. That means you need the performance of each print job and page to be predictable and you need to know what speed the press can be run at for a given combination of print Job, RIP and PC.

Knowing this, you may choose to slow down the press so that your RIP can keep up. Better still, keep the press running at full speed by streamlining the job with knowledge of optimizations that work well with your choice of RIP.

Or you could choose to return the print job to the generator with a report explaining what is causing it to run slowly. Armed with this information, the generator can rebuild the job, optimized for your chosen RIP.

Whatever you choose, you will need predictable print jobs to drive your press at the highest speed to maximize your digital press’s productivity.

If you want to know more about the kind of job objects and structure that can slow RIPs down, and the challenge of producing predictable jobs, download this guide: Full Speed Ahead – how to make variable data PDF files that won’t slow your digital press.

You can also find out more about software to optimize both PDFs and non-PDFs for your digital press by visiting our website.

Is your printer software up to the job? The impact of rising data rates on software evolved from traditional print processes

Future-proofing your digital press to cope with rising data rates

Be the first to receive our news updates and product news. Why not subscribe to our monthly newsletter? Subscribe here

The impact of poorly constructed PDF files on production schedules has increased as press resolution, colorant count, speed, and width rise – greatly increasing the data rate required to drive them.

This increase in data places additional demands on the processing power of the DFE and risks slowing down the digital press: a delay of half a second on every page of a 10,000-page job adds 90 minutes to the whole job, while for a job of a million pages an extra tenth of a second per page adds 24 hours to the total processing time.

In his guide: Full Speed Ahead – How to make variable data PDF files that won’t slow your digital press, Martin Bailey, distinguished technologist at Global Graphics Software, gives some technical recommendations as to how you can make sure that you don’t make a PDF file for a variable data job that will bring a digital press to its knees. It provides objective information for graphic designers, print buyers, production managers, press operators, owners of PSPs, and developers of digital presses and composition tools.

Martin has just released a second edition of the guide and in this film he talks about the updates to Digimarc‘s marketing communications manager, Rob Fay. Digimarc provides additional functionality to Global Graphics’ software platforms and is a sponsor of the guide.

Topics in the interview include: 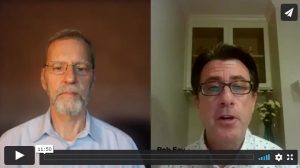 To be the first to receive our blog posts, news updates and product news why not subscribe to our monthly newsletter? Subscribe here