Looking for a new role as a software developer? We’ll be attending the Cambridge Careers Fair on Friday, 4th March. Come and meet our team and find out more about what Global Graphics Software has to offer and two roles we currently have available:

If you’re a graduate, perfect! We’re also looking for recent mathematics or computer science graduates or those who have a year or two of real software development experience to join our graduate program.

Whilst primarily aimed at graduates, we are also keen to hear from candidates without a degree who have strong demonstrable skills in software development. We’re also interested in giving opportunities to veterans and service leavers.

Our graduate program will kick-start your career as a software engineer and give you valuable skills and insights into our industry.

We’re looking forward to seeing you at the careers fair next week. In the meantime, read about what our software developers get up to here at Global Graphics Software:

Be the first to receive our blog posts, news updates and product news. Why not subscribe to our monthly newsletter? Subscribe here

Meet Lavanya, one of our software test engineers. Lavanya joined our print team in 2014.

What is your background?

I was born in India and moved to the UK in 2007. I am from an electronics and communications engineering background and my love towards artificial intelligence, mathematics, automation and electronics has helped me progress academically and pursue an MSc and a PhD.

I enjoyed singing back in India, performing at various shows since childhood and finally managed to sing in a professional capacity for a couple of albums in our regional language. I now enjoy working with my boys making pet electronic projects in the spare time.

What were you doing before and how did you come to work at Global Graphics Software?

I worked as a senior integration engineer for Vix Technology Limited in Cambridge for seven years before joining Global Graphics in 2014. Although I had no experience of the printing industry, I had a great interest and curiosity in it, and I felt there would be a lot to learn with Global Graphics’ technology and software.

What is the best thing about working at Global Graphics Software?

I have never had a boring day in the past eight years; there is no limitation on how much I can learn and grow personally and professionally here at Global Graphics. I have been given opportunities to enhance my skills, knowledge and capabilities throughout my past eight years with the industry’s most experienced and helpful colleagues. I also love the Cambourne-based office and its location – it’s great and peaceful for my lunch time walks.

What has been your career path since joining the company?

I joined the print team, working in automation, and I have since developed skills in color management.

What is the most exciting thing about your work?

I love the fact that I can explore and learn any area, and you are welcomed to do so. I always got great support from my colleagues and my line managers, which makes it exciting to move forward.

What keeps you here?

There’s always more to learn here and my colleagues are very experienced and helpful. I also always get the support I need to do my continuous professional development.

If you’re a recent mathematics or computer science graduate, or have a year or two of real software development experience, then we want to hear from you. 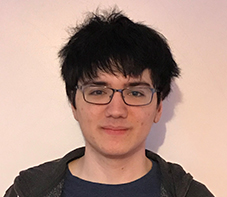 What is your background?

My programming journey started at A-level where I first took an interest in the subject, never having had a formal opportunity to study it before. I followed the path all the way through to graduating with a first-class degree in Computer Games from the University of Essex.

The day was built around a specific task, which was both fun and challenging. There were some surprises, but they were integral to the experience so they could see how we’d react, which was interesting to say the least. For example, we were working in groups, but we weren’t given much in the way of source control, to see how we’d cope merging our work together at the end. It was a cool way to introduce some chaos.

Tell us a bit about your Global Graphics Graduate Program experience

The scheme is separated into three sections where each is spent in a different discipline of QA, Support, and Development, each lasting about four months. There’s also an initial period where you’re taught the basics and get to integrate with the company for a bit. You learn quite a few tricks that’ll be useful too, one of which being how to use ReSharper to speed up your overall pace of working. I initially thought I’d only be interested in development, but I was enlightened to the other two disciplines in a way that I enjoyed. I was involved in meaningful projects the whole way, so there’s no feeling of apathy since everything you do is useful to the company.

For QA, we were tasked to investigate a new way of implementing UI testing that would be competitive to the current choice, and the result of that was a successful integration of a new UI testing library that was significantly cheaper and didn’t require juggling licenses between PCs.

What has been your experience since graduating the program?

I graduated the program feeling pretty good about my progress made during my time here. I entered this company with very little C++ knowledge and below-average C# knowledge, and on graduation I felt that I was a lot more competent at both, as well as skills beyond just knowing languages: using source control, exploring the parts of IDEs that I took for granted while studying at university and using programs that I’d never even heard of before joining. I’ve definitely grown as a person too. I’m now a developer on the Direct™ product team, which has been a rigorous trial by fire by diving head-first into a C++ codebase. I am certainly happy with where I am in the company now and want to continue to develop myself as a member of the team.

How would you describe the support you received from your mentorship team?

The support I received was instrumental in my development here. It was hugely effective, with just the right amount of assistance given so that it neither felt like handholding nor isolating.

What’s the best thing about working at Global Graphics Software?

The flexibility is amazing. The workday isn’t a fixed block of time, it’s whatever you want it to be (within reason). The ethos is basically “as long as the work gets done, and you turn up to meetings, work however long you want”, which is a boon to someone like me who has trouble getting out of bed promptly.

The office in Cambourne has a roomy atmosphere with lots of natural light, with a well-stocked kitchen to handle our metabolic needs. There’s also a huge expanse of green space outside the office too, which is perfect for going for mind-clearing walks.

What is the most exciting thing about your work?

I’m in it for the knowledge gained, since in under two years I feel like my skills have increased greatly. Every task I pick up offers the chance to enrich my understanding somewhere.

How have you found working remotely?

Before the pandemic, I very rarely worked from home, but now having done it consecutively every day since early March, I’m very much used to it and don’t think I could return to normal. The company has really embraced working from home and have implemented the systems required to make it work well, to the point that I don’t really feel disadvantaged from the situation imposed on me.

Have you taken part in any of the social events?

I’m a fan of the board game nights that were picking up steam shortly before lockdown, as well as the Shed meetups.

What advice would you give this year’s graduates?

As long as you have the enthusiasm to learn and grow, and can go with the flow, there’s nothing to really worry about. ‘Don’t suffer in silence’ is the mantra to grow here. Ask questions when you get stuck or if you need something explained.

If you’re interested in joining the Global Graphics Software Graduate Program visit our web page to find out more:
https://www.globalgraphics.com/company/careers/graduate-program